The Euro has now found itself in a new trading range for the past 5 days against the US dollar but that will probably change today with the release of key data from the US which may dictate the speed of interest rate hikes from the US Federal Reserve.

The U.S. Labor Department is set to release January’s consumer price index figures to the market during the American trading session and analysts are expecting a figure of 0.4% in January which adds up to a 7.2% gain year on year and is the highest reading in almost 40 years.

This news follows on from the recent better than expected jobs report from the US and any surprises to the upside regarding the inflation figures is likely to see the greenback rally against the Euro as predictions of a faster rate hiking cycle from the Fed grip the market.

More voices from the ECB are now coming on board regarding rate hikes in the Eurozone which has what has been underpinning the recent rally for the Euro and comments from Bundesbank President and ECB Board Member Joachim Nagel yesterday confirmed this and he noted the "First step would be to end bond purchases, then rates could already rise in 2022."

Today we will also see another round of speeches from ECB board members Guindos, Villeroy and Lane, who are normally the more dovish voices regarding the tightening of monetary policy so any changes in their stance towards the bullish side may lend some support to the Euro. 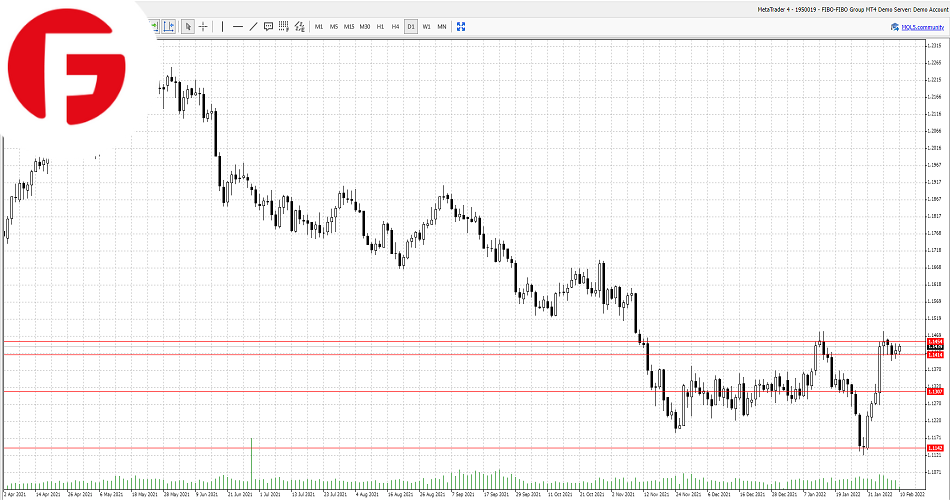 On the chart, we can see that the EUR/USD currency pair has found solid support at around the $1.1414 mark and is pushing higher towards the resistance level of $1.1454 and market participants await the crucial CPI figures from the US.

The chances are highly likely that we will see a breakout of this channel today and as mentioned earlier, stronger numbers than expected are likely to bring the Euro’s rally to a halt while market participants await clarification that the ECB also intends to follow the Fed’s example by raising rates to tackle record inflation.